Waste mineral oil is a kind of mineral oil extracted and refined from petroleum, coal and oil shale. In the process of exploitation, processing and use, the original physical and chemical properties are changed due to external factors, so they can not be used anymore. It mainly comes from oil sludge and oil residue produced by oil exploitation and refining; The deposit produced during the storage of mineral oil; the Replacement of machinery, power, transportation equipment and oil residue and filter media in the regeneration process. According to the national hazardous waste list, it belongs to hazardous waste.

The process is similar to simple regeneration, the main purpose is to remove water, suspended mechanical impurities and colloid dirties from the waste oil. It is mainly used for regenerating lubricating oil or hydraulic oil. Although all the indexes of regenerated oil can not meet the new oil index, they can be used after mixing with or adding additives with new oil.

The advantages are simple equipment, small investment and low operating cost; The disadvantage is that the quality of regenerated oil is poor, waste residue and flocculant will cause secondary pollution to the environment.

From the point of view of environmental protection, this technology produces a large number of industrial waste residue, which has a serious problem of secondary pollution, and the quality of the regenerated oil can not meet the new oil standard.

3. Re-refining process: it is a regeneration process including distillation.

Re-refining process is the main process of waste oil treatment at present. With the development of process technology, more advanced treatment processes are derived, such as the application of molecular distillation and deep hydrotreating, which greatly improve the quality of waste oil regeneration products, even can reach the quality of new oil.

1. Sedimentation and filtration method are similar, basically natural sedimentation or heat preservation (heating to a certain temperature) sedimentation for coarse filtration and dehydration. Can choose centrifuge to remove most of the solid impurities.

2. Distillation process: now the common heating distillation is heated by a heating furnace, and then it enters the flash tower for dehydration and light components after reaching a certain temperature, and then carries out vacuum distillation, collect basic oil components according to different temperature and pressure. In order to avoid coking and cracking problems which are easy to appear in the heating process and improve the separation efficiency and product yield, the process used in the distillation of waste mineral oil is mainly divided into the following:

1) Thin Film Evaporation: the waste oil enters the evaporator radially from the top of the heating zone; The material is distributed to the heating wall of the evaporator through the distributor, and then the rotating film scraper scrapes the material into a uniform liquid film continuously and evenly, and pushes it downward in a spiral shape. In this process, the rotating film scraper ensures the continuous and uniform liquid film to produce high-speed turbulence, and prevents the liquid film from coking and scaling on the heating surface, so as to improve the total transfer coefficient. The light components are evaporated to form a steam flow, which rises and reaches the external condenser directly connected with the evaporator through the vapor-liquid separator; The heavy components are discharged from the cone at the bottom of the evaporator, and three-stage evaporation is generally adopted.

Disadvantage: the film scraper is easy to broken, it needs to change frequently.

3) Atmospheric and vacuum distillation: the waste oil is heated gradually in the form of circulation.  As the temperature of the waste oil rises to around 55℃, the first cut-off gasoline starts to release from the waste oil. As the temperature of the oil rises to around 110°C - 220°°C, the second cut of diesel oil is released. Base Oil is the main product and its distillation starts at around 220°C and continues up to 330°C. Light base oil is distilled out around 220°C-300°C, and heavy base oil distills out during 300°C -330°C. Finally, the process ends when the residual material in the waste oil does not vaporize. At this point, the heating in the distillation process is stopped and the process is essentially complete. We can pump oil residual out to use as bitumen and heavy fuel oil.

3. The main purpose of the base oil extraction stage is to remove the non-ideal components and impurities in the base oil. The base oil after exaction can be sold as the most basic product or sold to the blending factory.  the main refining methods are as follows:

1) Acid+ clay refining: The impurities in the base oil are forced to oxidize by using the strong oxidizability of concentrated sulfuric acid to form flocculate for precipitation separation, and then the base oil is decolorized and filtered by adding clay after alkali neutralization. Because of the heavy pollution, high loss of products, great harm to the health of operators, and the poor compatibility of products, the process has been banned.

3) Hydrofining: also known as hydrotreating, hydrofining is one of the most important refining methods for petroleum products. It means that in the presence of hydrogen pressure and catalyst, harmful impurities such as sulfur, oxygen and nitrogen in the oil can be converted into corresponding hydrogen sulfide, water and ammonia and removed, and olefins and dienes can be hydrogenated and aromatics partially hydrogenated, so as to improve the quality of the oil. After hydrofining, the base oil can reach the standard of Group II base oil.

4) Other refining methods: It is mainly refined by strong oxidation and adsorption filtration. At present, the most practical method is catalytic oxidation. Its principle is to fully react with base oil by using gaseous and plasma oxidants to remove free metal impurities, non-metal impurities, sulfur, sulfur, etc Nitrogen and other non-ideal components are separated from base oil in the form of flocculent or colloidal asphalt precipitate, and then filtered to obtain very high-quality base oil. Moreover, the process has the advantages of small investment and simple equipment, so it should be widely used in the future.

YANGJIANG adopts the process of pretreatment, electromagnetic heating, vacuum distillation and solvent refining. The self-developed formula greatly reduces the production cost. The cost of catalyst is only USD8-10 for treating one ton of waste oil, and the loss in the extraction refining process is less than 0.8%, the base oil has a high yield of 99%, and the sulfur content is controlled within 50ppm, And our equipment contains a solvent recovery device, so that the solvent can be recycled then reused again and again.

The content of saturated hydrocarbon is 98.71%, and the antioxidant capacity is 350 min. 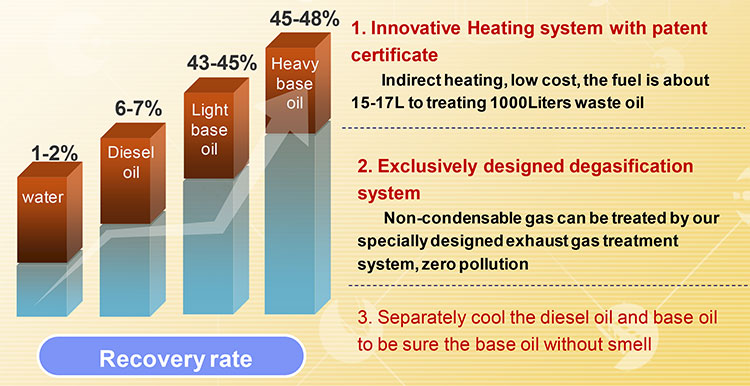 The electromagnetic induction coil: after being energized, forms a magnetic field, generates a current vortex, then generates a large amount of heat;

On the other hand, the coil skin produces infrared heat, which generates a small part of heat.

It is totally different from traditional electrical pipe resistance heating.

And it uses a PLC control heating part, easy and convenient. 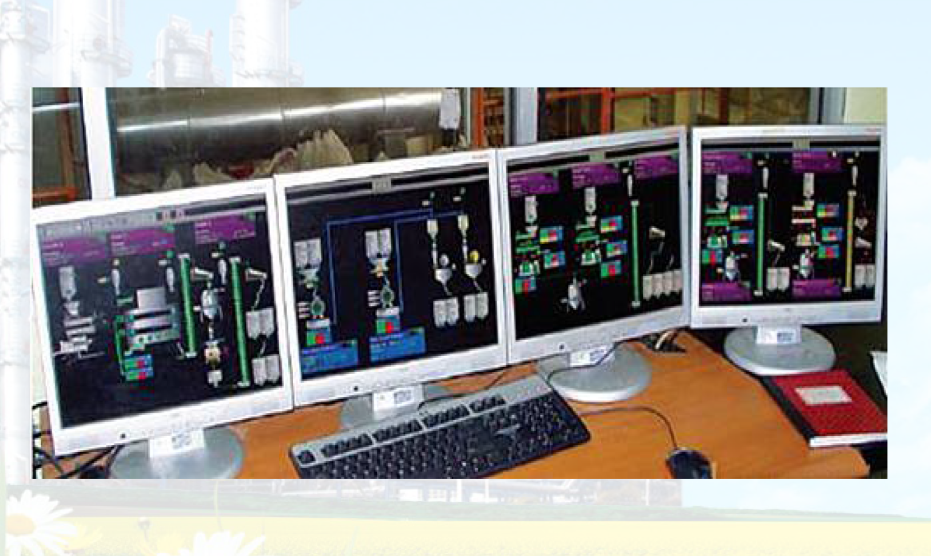 After distillation, you can get the following color base oil:

After solvent extraction, you can get the following white color base oil: