After a lot of research, carelessly throw waste oil away can cause great harm to the environment. Why is waste oil so harmful to the environment? Waste oil refers to the waste oil replaced from various machines, vehicles, and ships. In the process of using fuel, diesel, or gasoline, a large number of colloids and oxides are produced due to the external pollution of its oxides, thus reducing or even losing its functions of controlling friction, reducing wear, cooling and cooling, sealing, and isolation, reducing vibration, etc., which have to be replaced. Among them, chlorine, sulfur, phosphorus, and other organic substances are toxic. Many countries in the world list it as hazardous waste.

The continuous consumption of crude oil has led to the continuous rise of oil prices and the continuous production of waste oil. These problems are plagued by every company that needs to use a lot of lubricants. Therefore, we urgently need a waste oil treatment plan. After continuous updating of technology, waste oil can now be processed and reused.

The Steps to Refine Waste Oil with Waste Oil Refinery

Many years ago, re-refiners had difficulty recycling waste oil to produce good-as-new lubricating oil products. But starting in the 1970s, a series of technical innovations enabled the recycling industry to overcome the challenge, and re-refiners began to produce top-quality lubricating products. All of the firms in our industry begin the re-refining process by utilizing a technology that is borrowed from the crude oil refining industry: vacuum distillation. Vacuum distillation is followed by one of two technologies that produce high-quality re-refined base oil hydrotreating.

Distillation is a common processing technology, used not only in petroleum refining but also to produce grain ethanol – not to mention whiskey and rum. The main idea is that different compounds have different boiling points, and if you boil a liquid you can get different components to separate based on these boiling points. As this is applied to used oil recycling, the lube oil is boiled away from some of the heavier compounds, leaving behind an asphalt residue that is marketed for paving applications. At atmospheric pressure, lube oil has such a high boiling point that it would tend to break down before it vaporized – but if you boil it under a powerful vacuum, the boiling point is reached at a lower temperature, preserving the integrity of the lube oil molecules.

The material that emerges from the vacuum distillation process has many of the properties of lube oil, but it still includes some contaminants.

Hydrotreating: The Hydrotreating technology removes contaminants by exposing the oil to hydrogen gas, at very high pressure and temperature, in the presence of a catalyst. The catalyst promotes chemical reactions that remove trace metals and other contaminants from the lube oil.

Solvent Extraction: The solvent extraction process removes contaminants from the distillate by using an environmentally compatible solvent. At the same time, the valuable and reusable components of the oil are retained. The solvent used is also recycled and can be used again as often as necessary.

Most virgin lube refineries use these same processing steps to make lube oil. It just makes sense that re-refiners that follow these same steps have the capability to produce lube oil that is equivalent to the lube oil made from virgin crude!

What do you need to achieve waste oil refining? 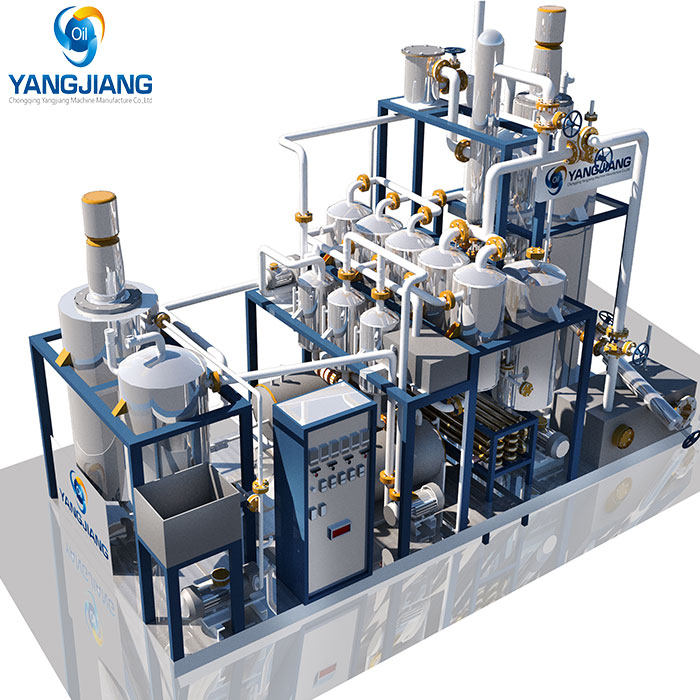