The sulfur content in diesel has a great influence on the working life of the engine. Active sulfur can directly corrode metals, and in terms of active or inactive sulfides, Soz and S03 generated after combustion will form sulfite and sulfuric acid at high temperature when meeting water and steam generated by combustion, which will seriously corrode engine parts. When the sulfur-containing exhaust gas enters the cylinder wall and crankcase, the lubricating oil deteriorates.

The different forms and content of sulfide in the coke deposit after combustion will cause the piston ring to jam, and the corrosion and wear of related parts will be intensified; the high sulfur content also puts forward the requirements of high TBN and high net dispersion for diesel engine oil, and will shorten the oil replacement cycle. In addition, the exhaust gas containing sulfide will seriously pollute the environment. For vehicle diesel engine, the particulate emission increases by 0.034g / (kW · h) with the increase of sulfur content by 0.1%. When the mass fraction of sulfur in diesel is reduced from 0.3% to 0.0596, the particulate pollution is reduced by 9%. Therefore, low sulfur or nonsulfur diesel is the inevitable requirement of diesel quality in the future.

How to Eliminate Sulfur from the Waste Oil? 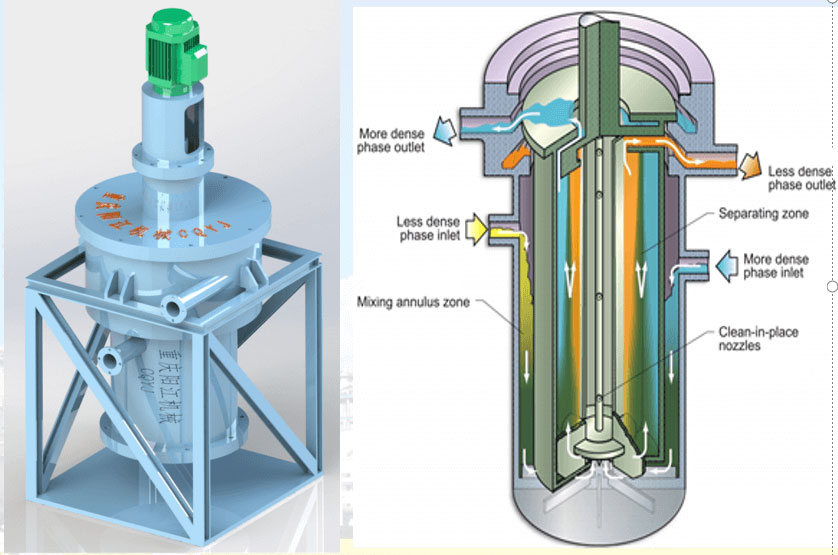 The process is like the left picture: Two immiscible solutions of different densities are pumped into the extractor through two entrances respectively, and then rapidly mixed in the gap between the drum and the shell, and the mixed liquid enters the drum through the inlet at the bottom of the drum, and the accelerated heavy phase is thrown to the lateral side of the drum. the light phase remains on the inside of the heavy phase, the two-phase interface is between the light phase outlet and the heavy phase underflow channel, and the heavy phase underflow channel is in the upper part of the separation zone that composed of heavy phase enthalpy.

ODS is a promising technology for the reduction of sulfur at low temperature (∼50 °C) and atmospheric pressure In ODS, heavy sulfides are oxidized by adding one or two oxygen atoms to the sulfur using appropriate oxidants without breaking any carbon-sulfur bonds, yielding the sulfoxide and sulfone, respectively. These oxidized compounds are then extracted or adsorbed from the light oil due to their increased relative polarity. Thus, the ODS is basically a two-stage process; oxidation, followed by liquid extraction.
Oxidation of DBT to the corresponding sulfone can be represented as:

Oxidation of the DBT derivatives to the corresponding sulfones increases their polarity and molecular weight. This facilitates their separation by extraction, distillation, or adsorption. Any of these separation methods could be used for the separation of sulfur from the organic phase.

Adsorption has been applied variously for the removal of sulfur compounds from liquid hydrocarbon fuels. Removal of DBT and other sulfur compounds has been studied over zeolites, aluminosilicates, activated carbon (AC), alumina, zinc oxide, etc.